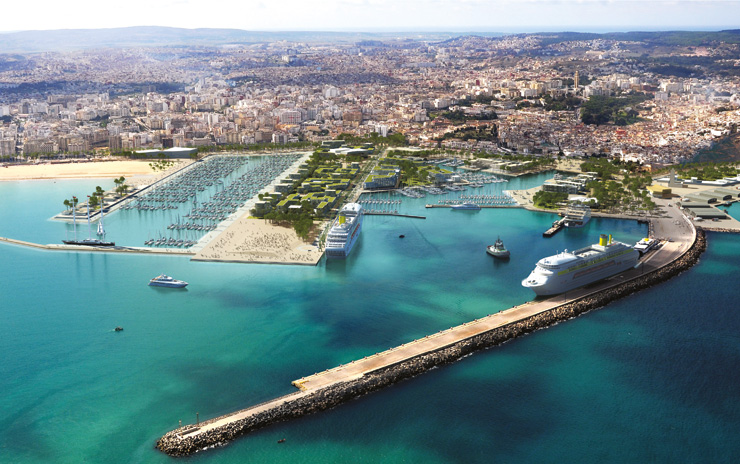 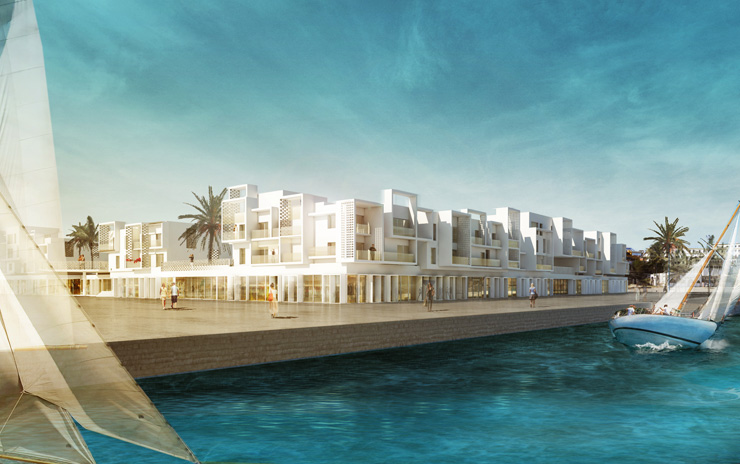 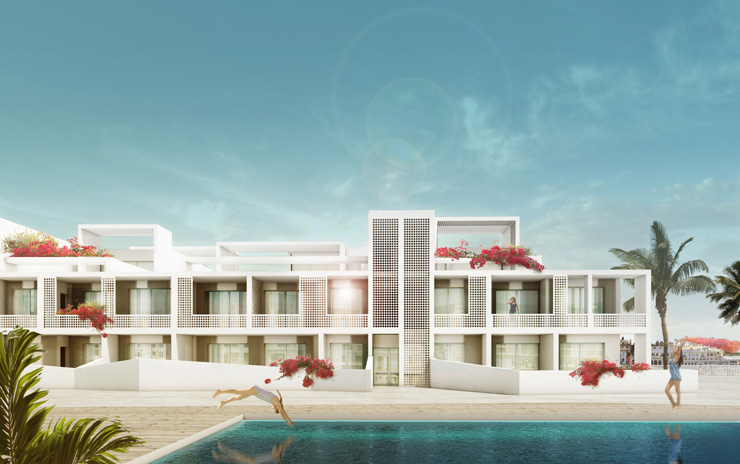 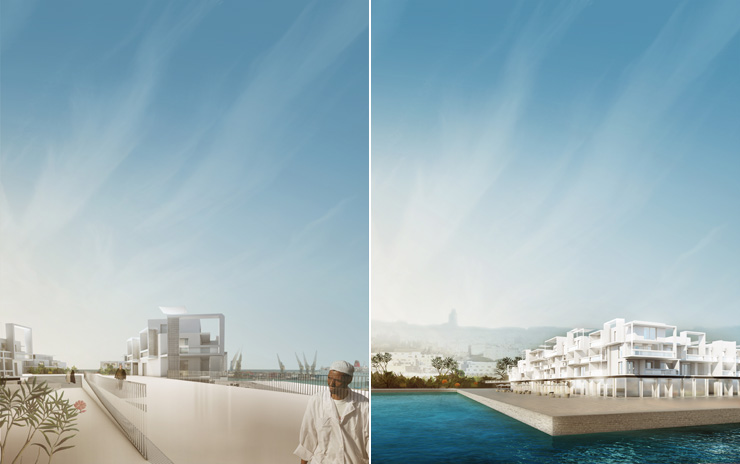 Project for the redevelopment of the harbour of Tangier
Tangier, Morocco
2012
16.754 sqm
client: SAPT, Société d’Aménagement pour la Reconversion de la Zone Portuaire de Tanger ville
architects: * with Cabinet Youssef Melehi Architecte, Diwane architectes
The plot 4 is located on the square of the former train station. The program, thought according to the scale of the masterplan, envisages the construction of a mixed-use building gathering shops, car-parks and housing.
This compact and unit building will gather 84 housing built on a base of shops on its rim and car-parks on its center.
The move of the fishing harbor is the way to recreate a contact between the city and the harbor water but also to create the atmosphere of a « inhabited harbor ».
This plot, settled on the earth platform of the former « Complexe Magasin 15 » suggests, in the West, an « urban » address facing the medina and opens its three other facades on the harbor and the new urban facilities. Like a lively souk or the former market of the fishing harbor, the spaces on the ground-floor will make this place lively and opened on the public spaces and the quays thanks to an « active » program, mostly commercial. The top floors welcome a peaceful residential complex organized around a semi-private plot’s center.
The project is organized around a ground-floor made of a commercial facing that surrounds a car-park of two levels. On the upper-floors, the residential typologies (up to 2 floors) with attics in partial occupation of the top floor experience a « domestic » scale, between a townhouse and a little collectivity. The implantation of the buildings is rational and mostly follows the alignment of the plot. The built volumes have privileged views (the harbor, the medina and the honor pool). The general volumetry continues the familiarity with the historic volumes and heights of the Medina. This perception is reinforced by the projections of the balconies and the loggias that create the rhythm of the facades. The implantation respects the general orientations of the masterplan. The visual continuities are kept, notably the one offered when we are going down the Portugal street.
The general layout envisages the creation of « collective gardens » at the center of the plot. Located at the heart of the project, they are placed on a slab that will be mainly vegetalized and covered by trees, above some mutualized car-parks.
The common parts of the plot’s centers are imagined as collective shared spaces that can be lived by the inhabitants.
The housing can access a garden planted and enlivened with squares and swimming-pools on the first floor.
A particular attention is given to the facades to exploit the best the predispositions of the site in terms of sunlight, climate, orientations and views. The frame notion is mixed with a local architecture element: the wooden lattice.
The project, in its density and morphology, suggests an efficient dispositive that offers a great diversity in the way of living in this place: between the historic city, its medina and the sea.