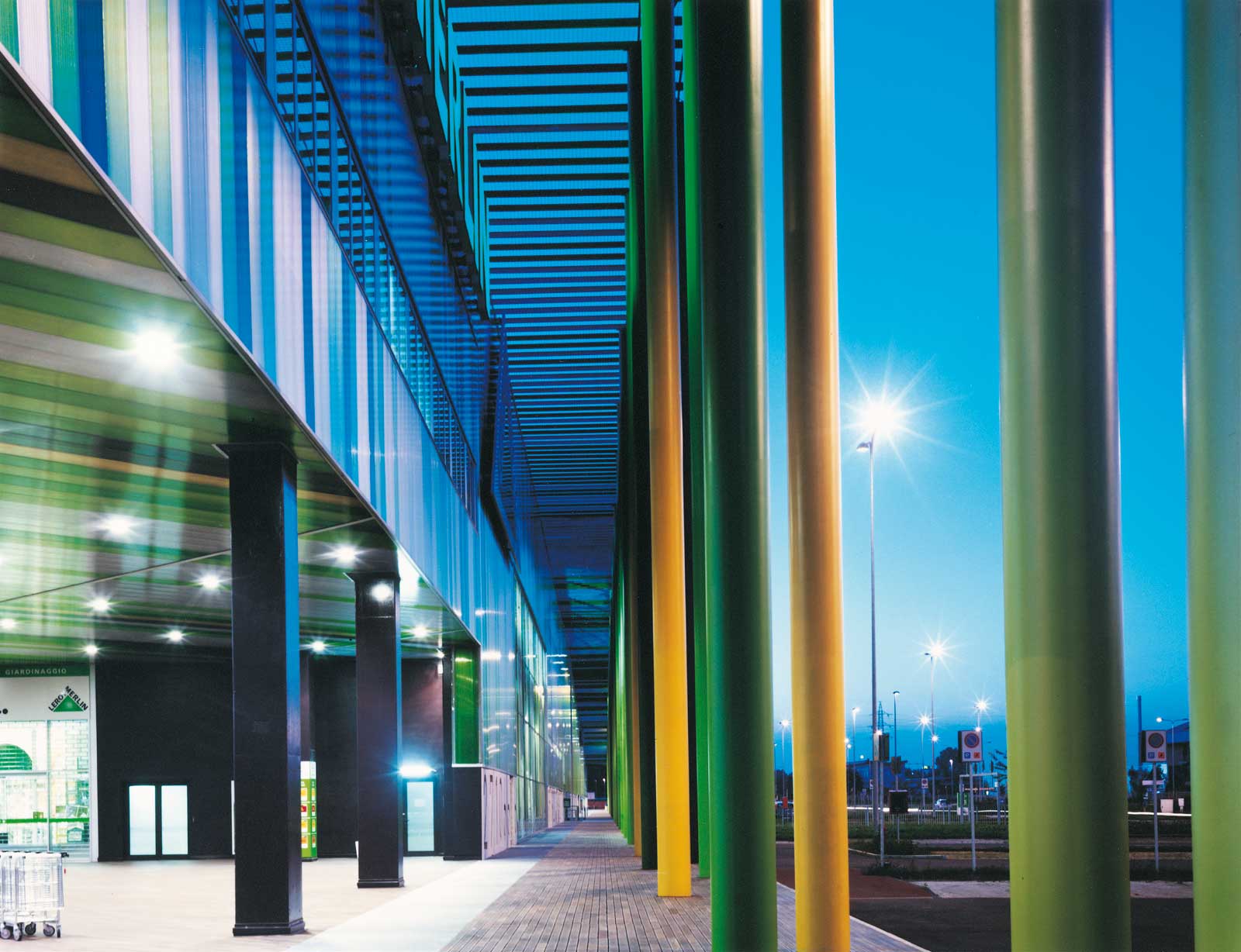 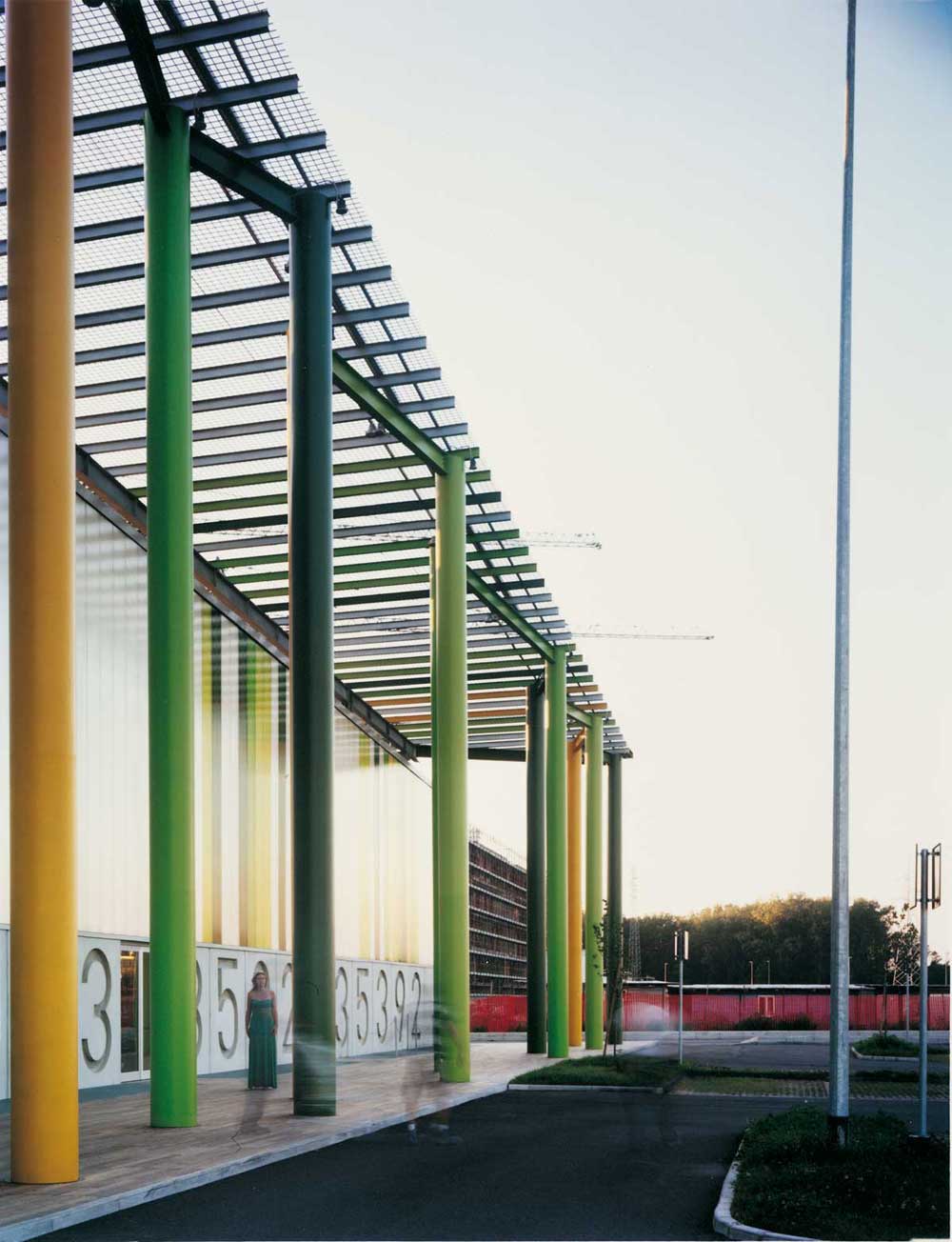 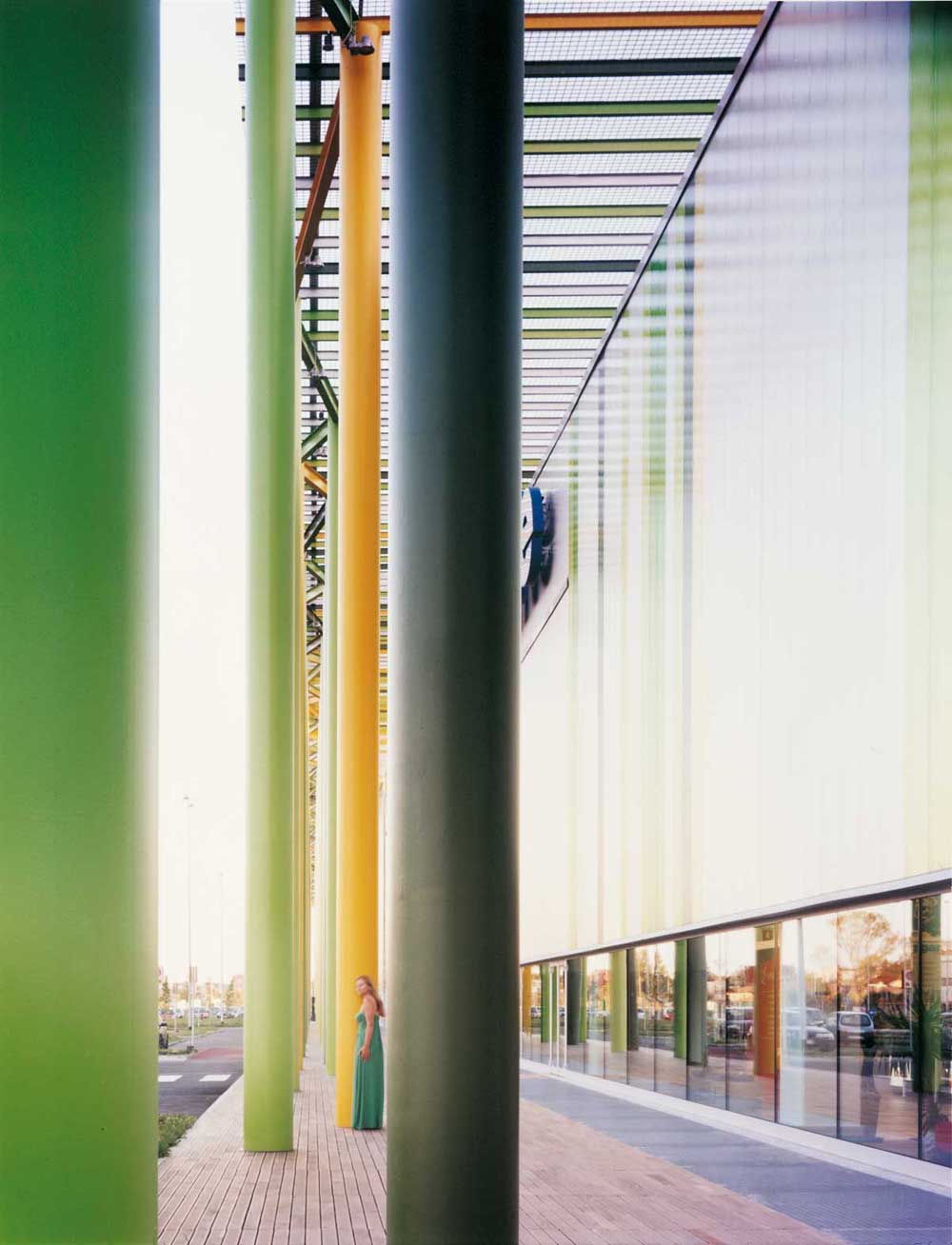 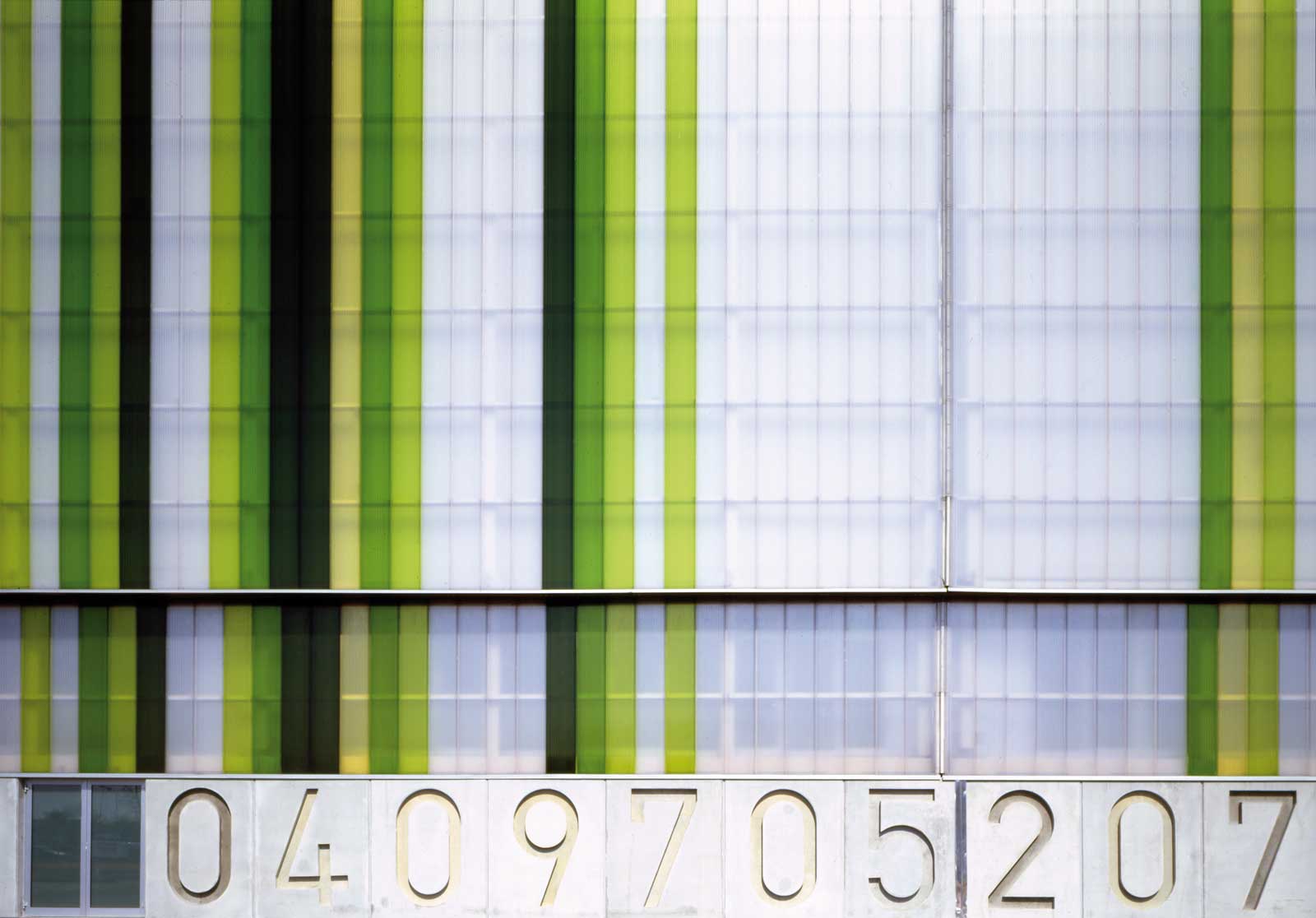 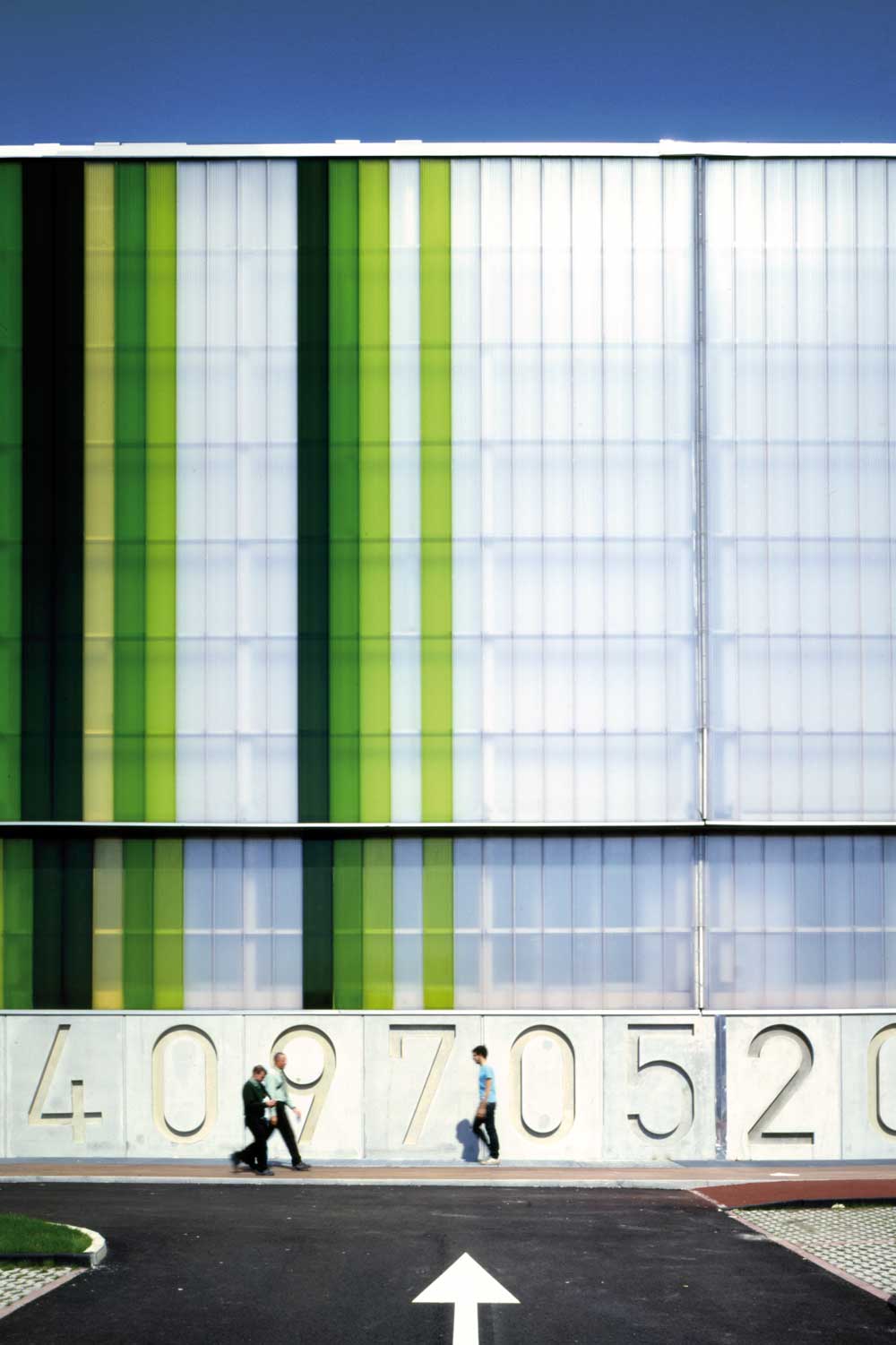 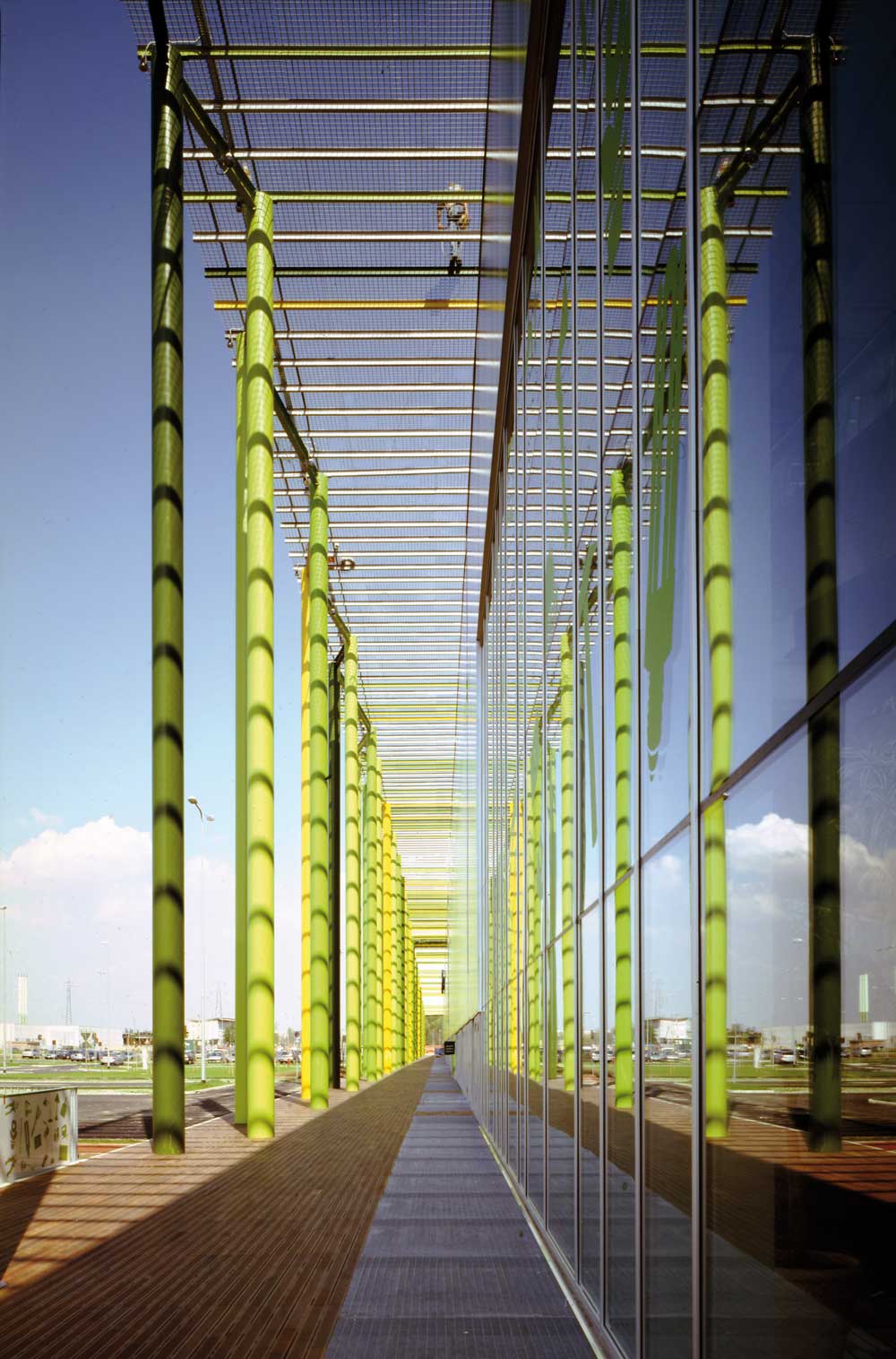 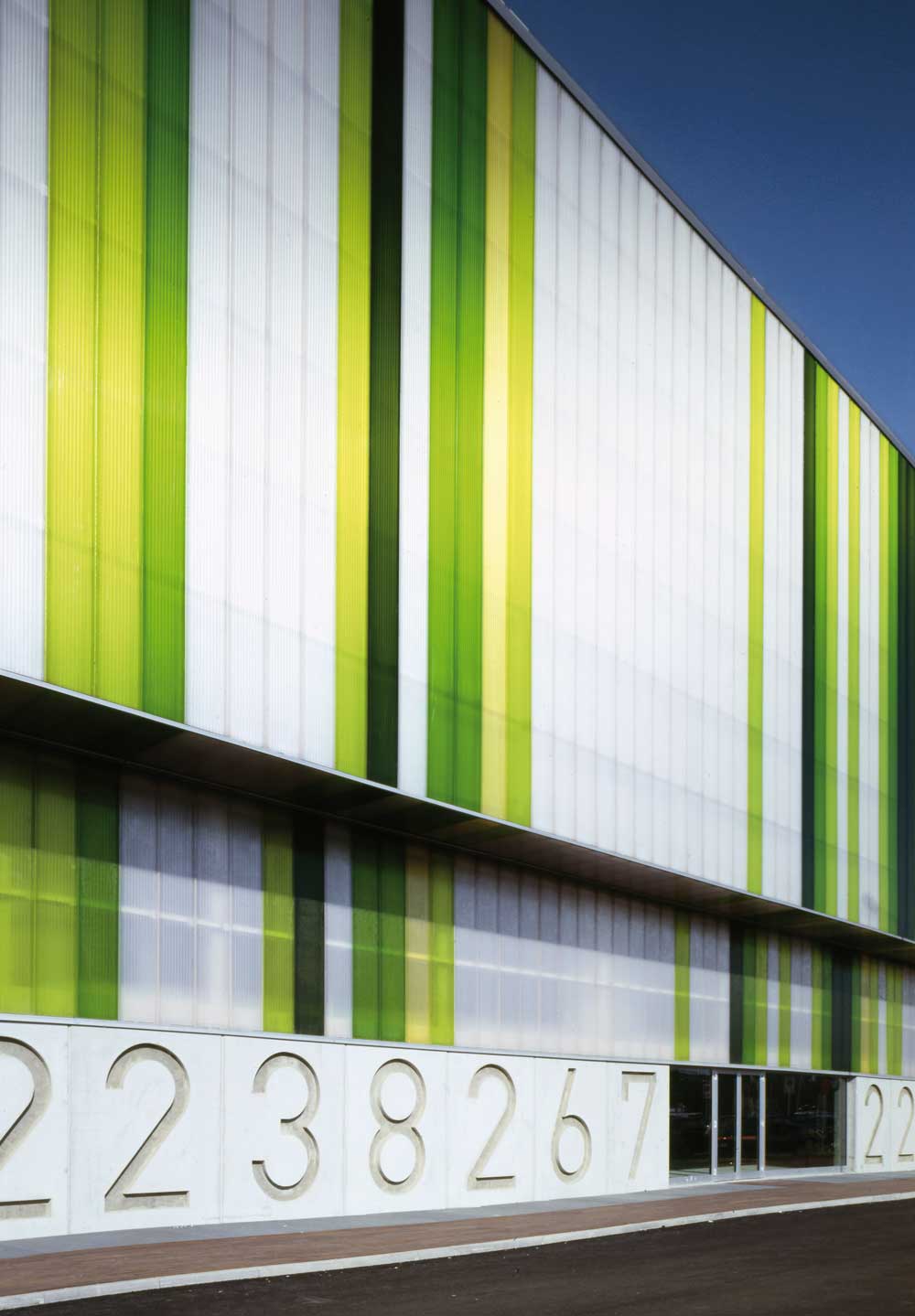 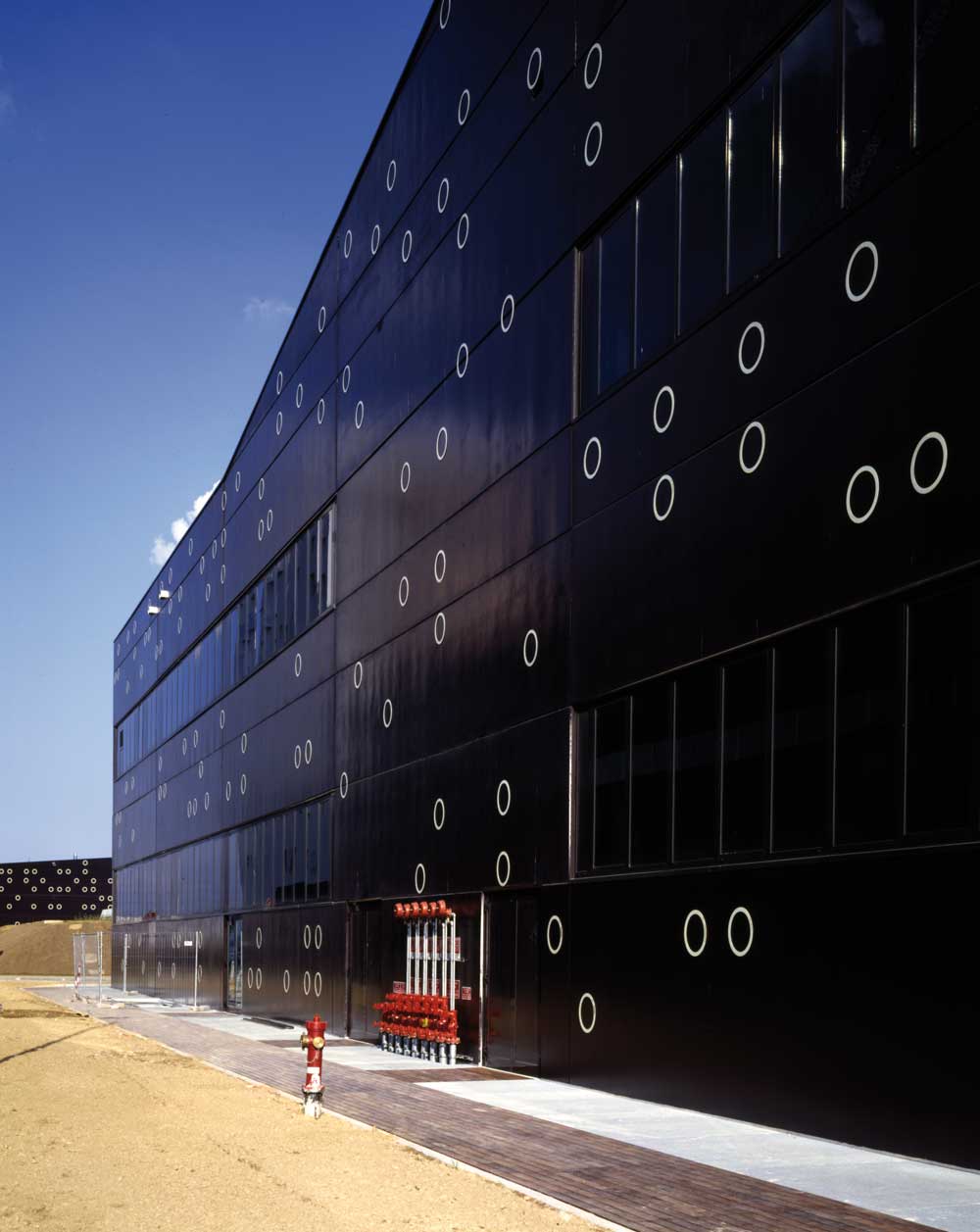 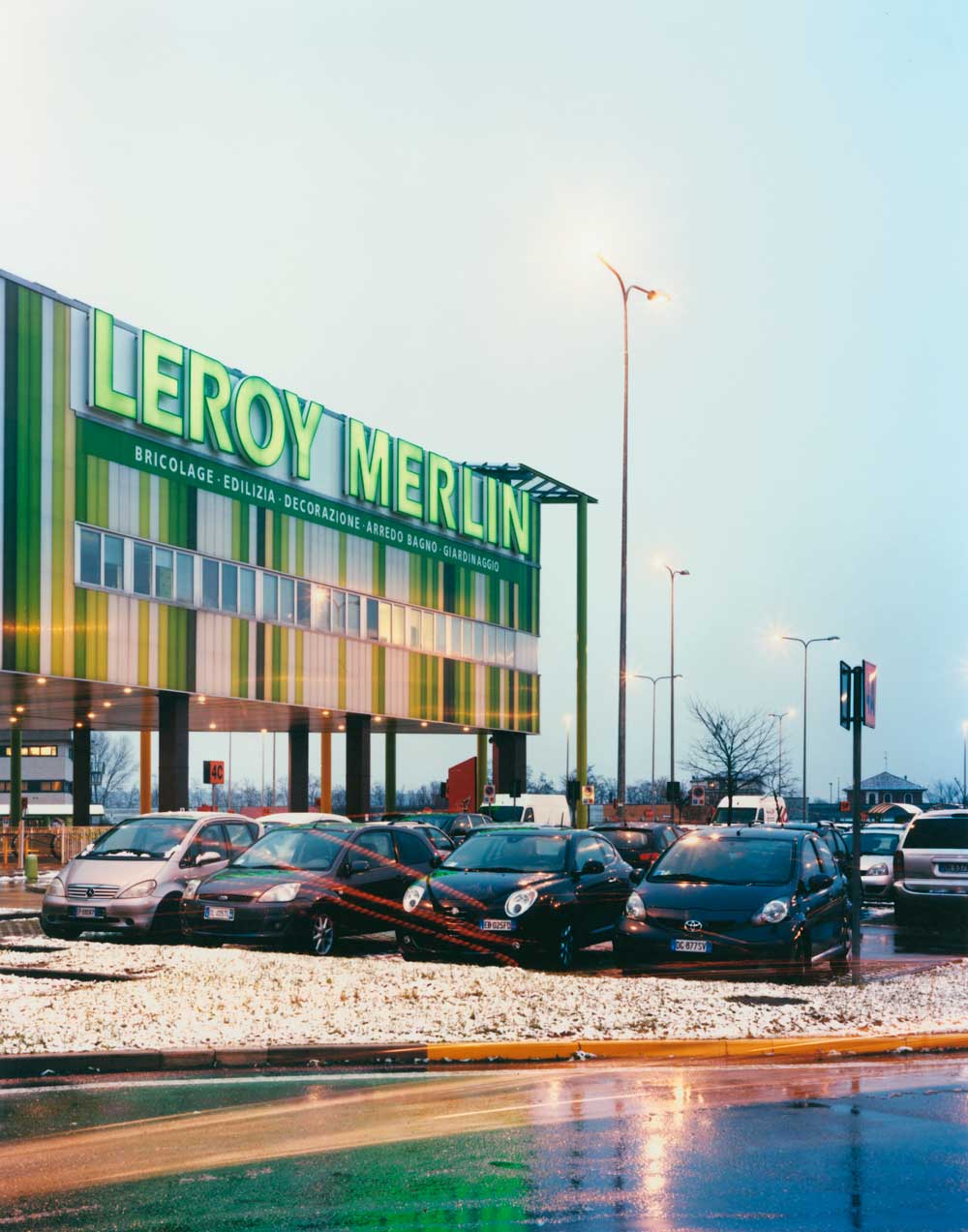 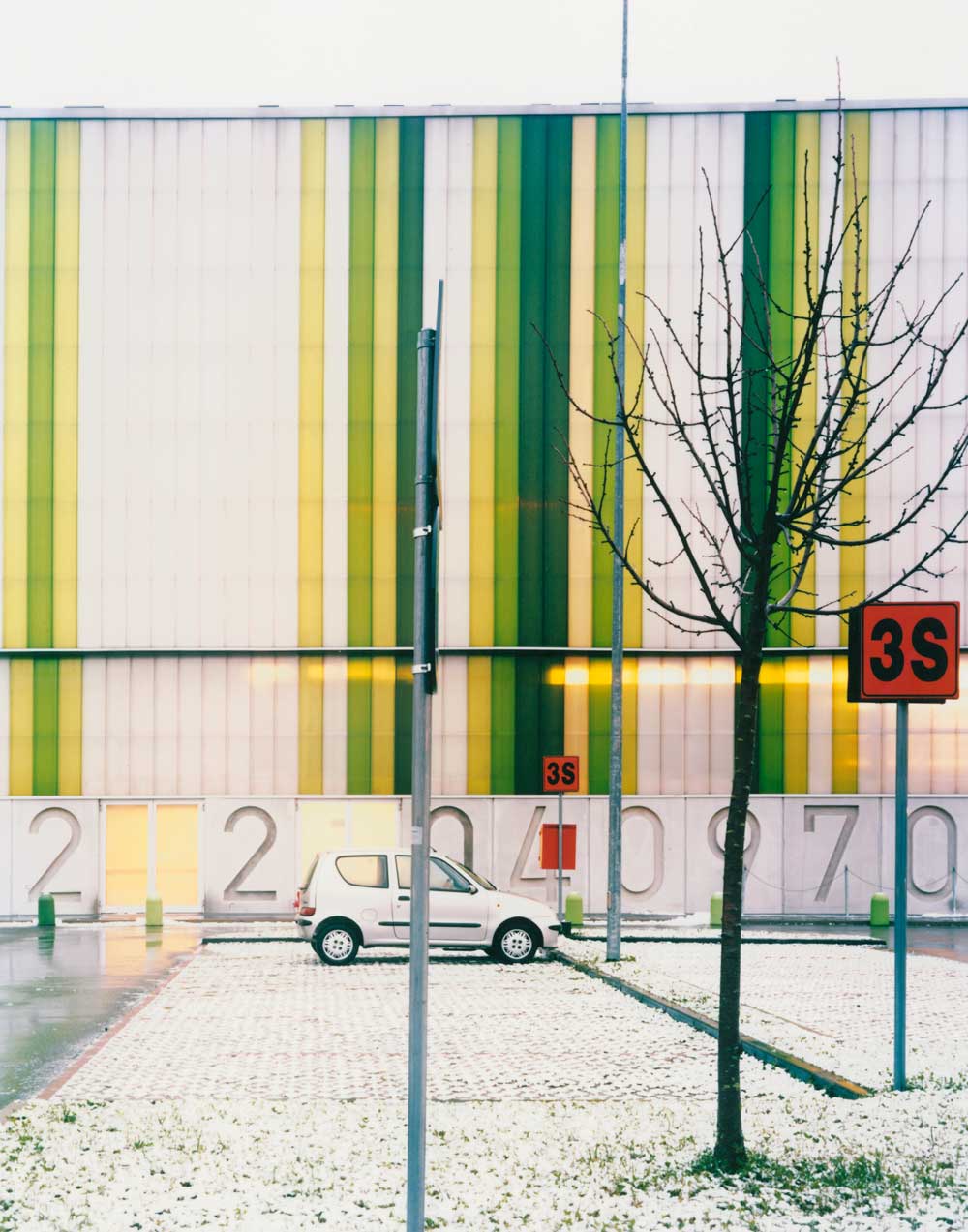 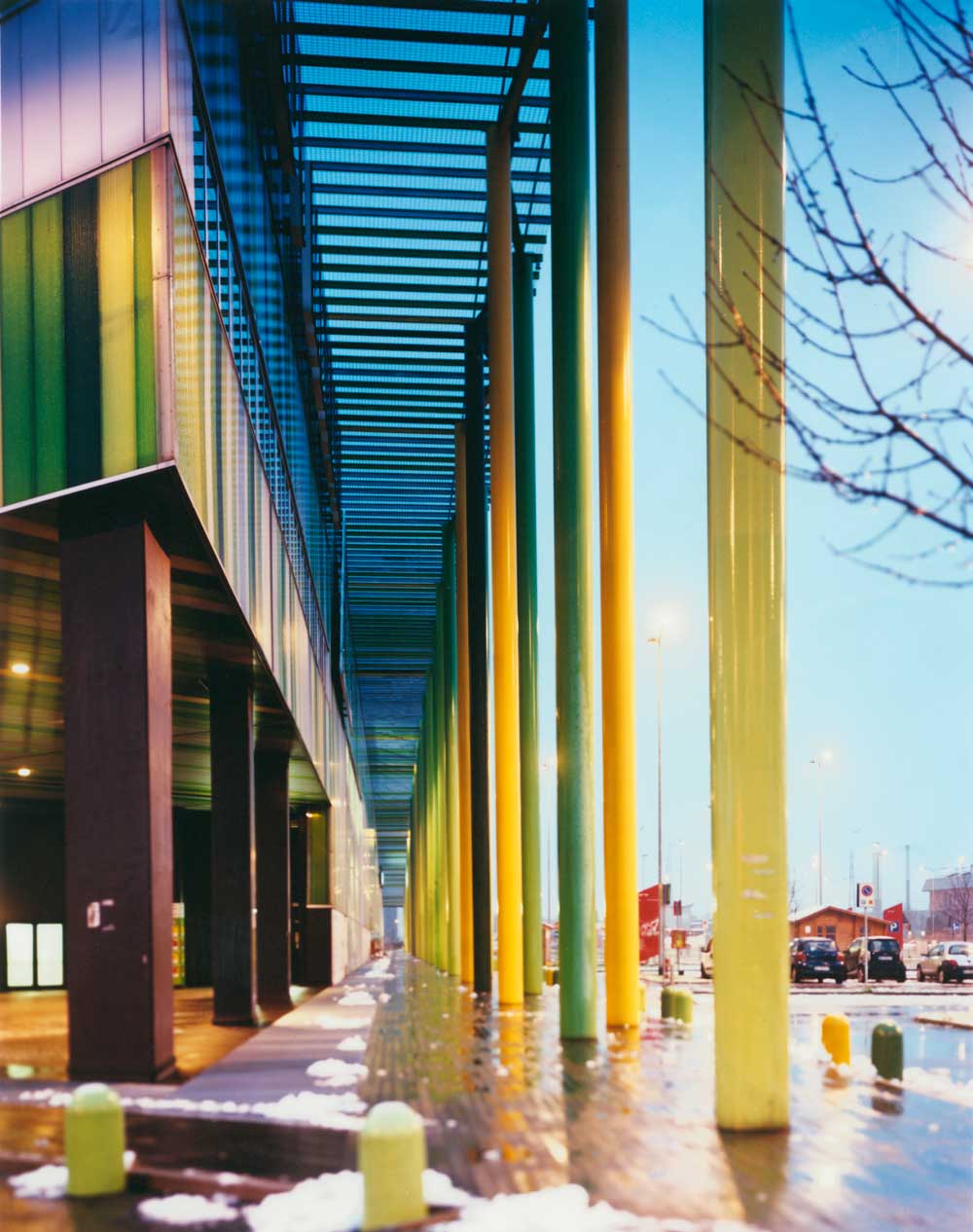 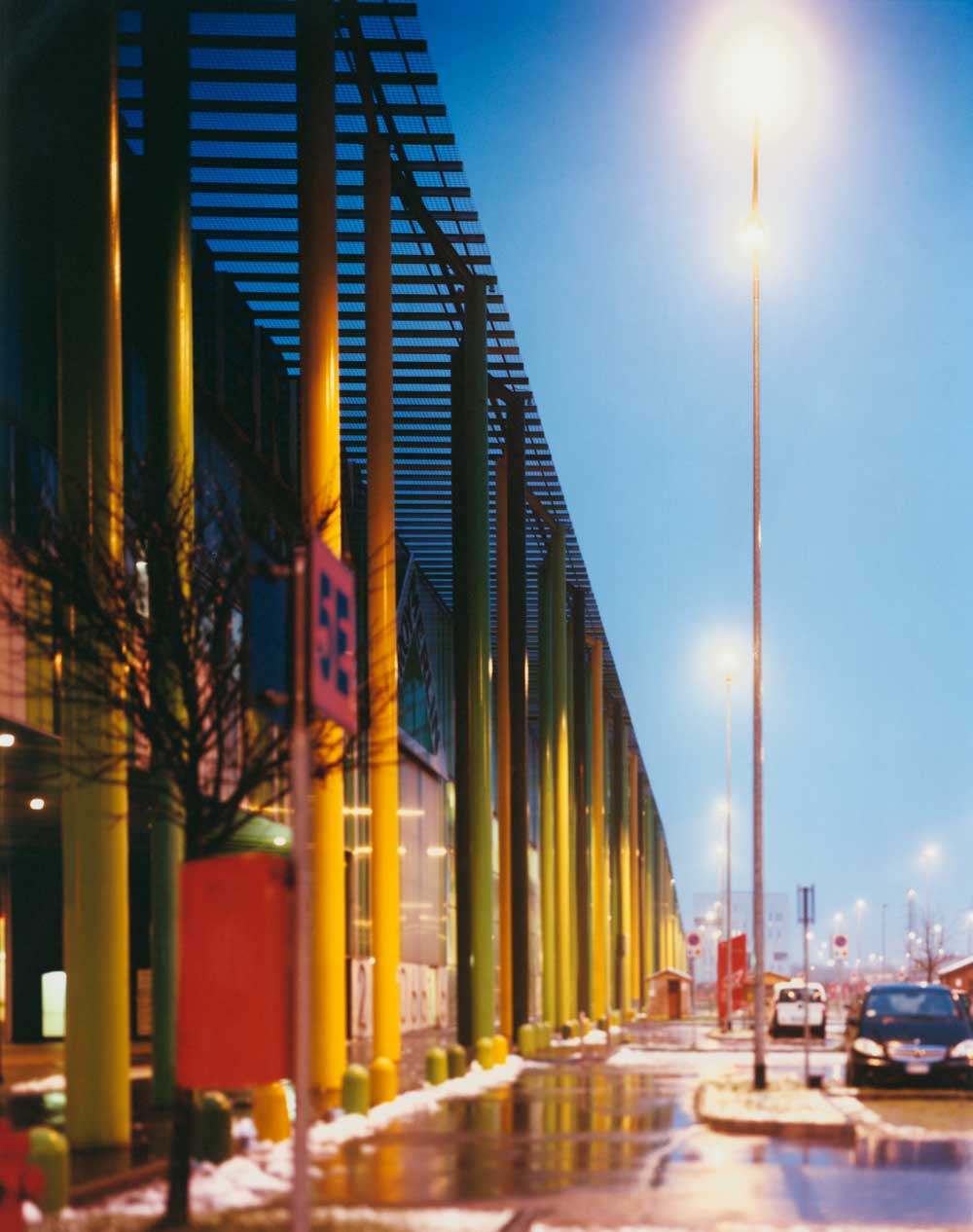 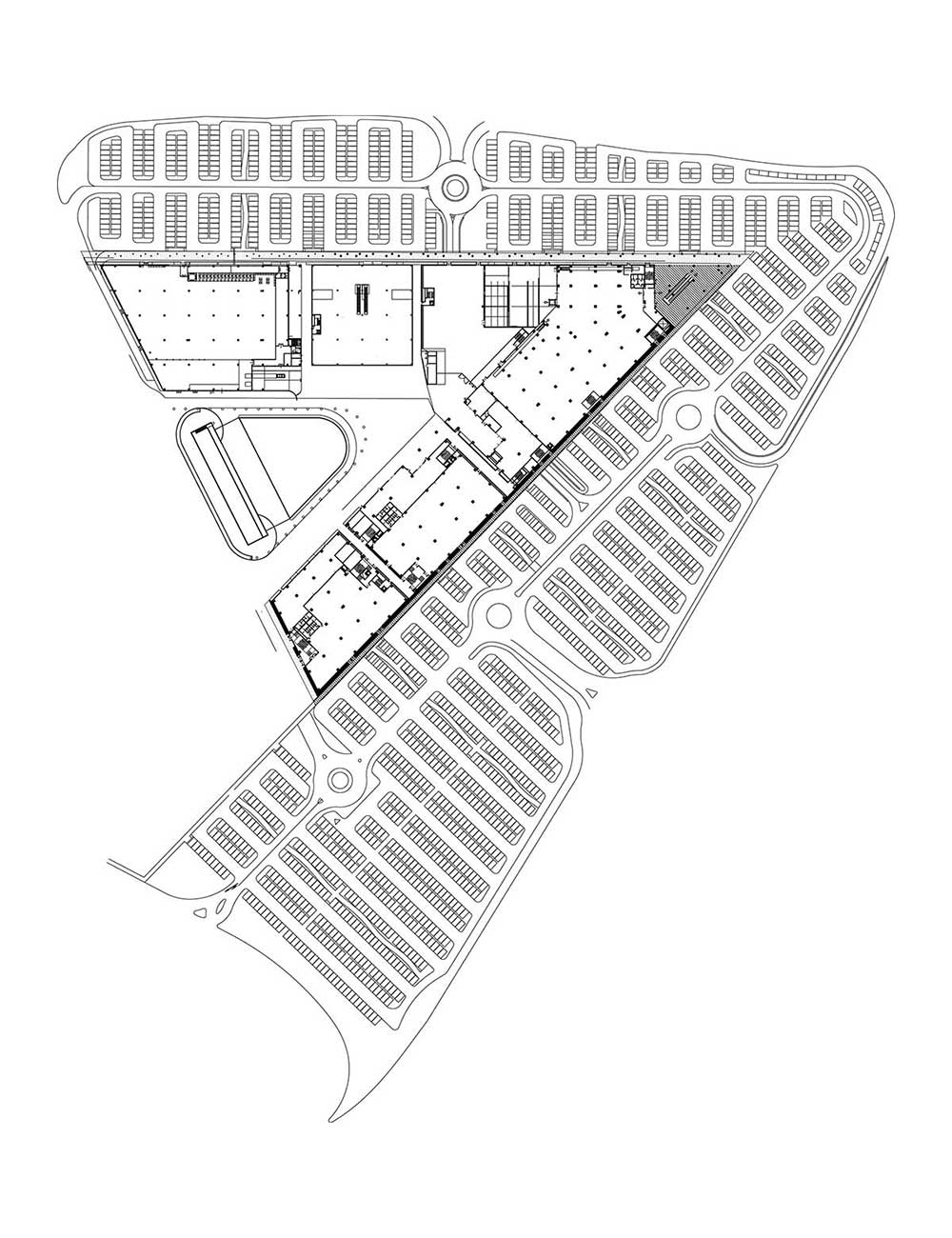 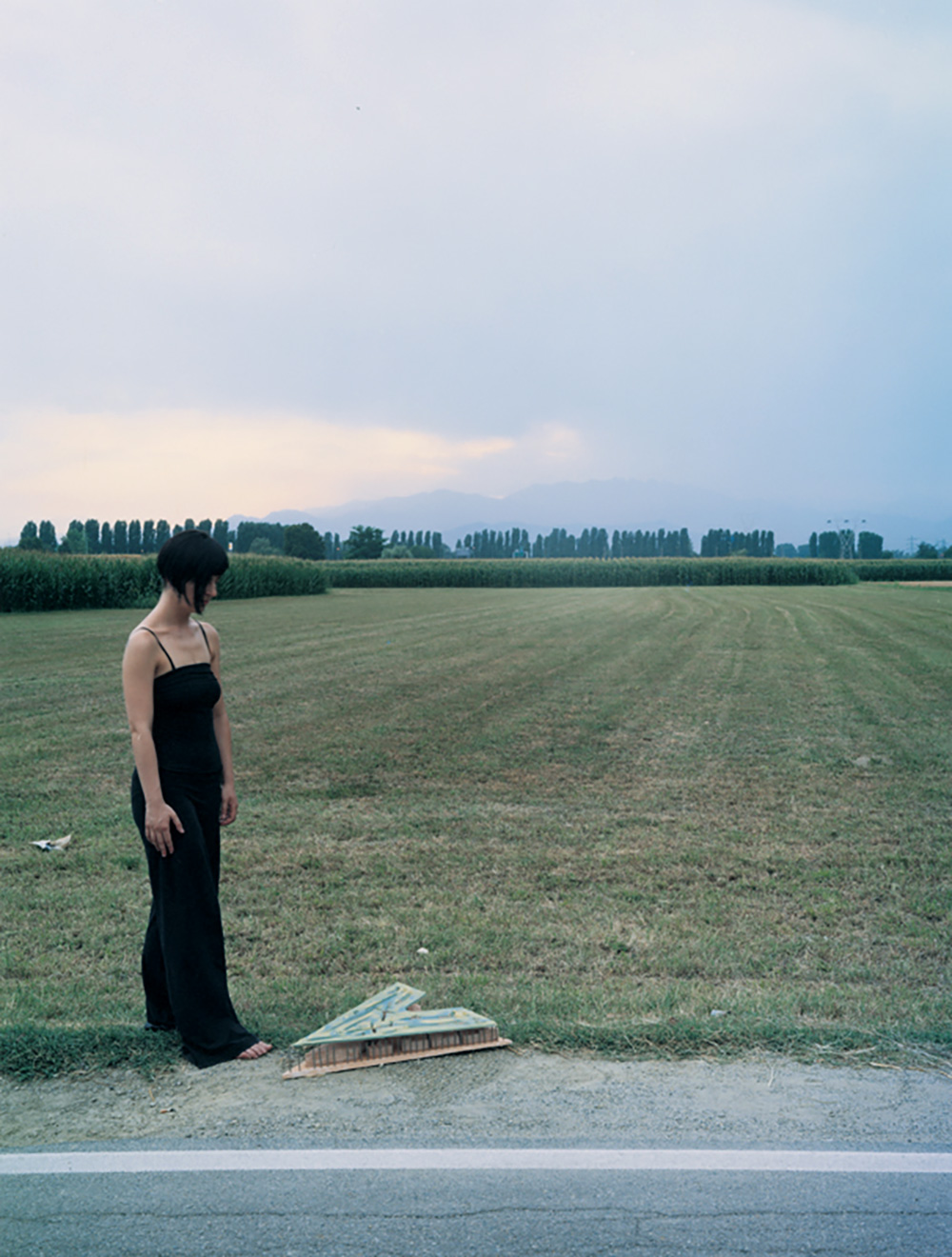 program: New retail park in D4 Area, Assago, Milan
gross floor area: 41 000 m2
client: Milanofiori 2000 srl
project: Alfonso Femia * with
structural engineering: IQuadro ingegneria
system engineering: Marco Taccini
contractor: A.T.I.
photos: ©E.Caviola, ©Riolzi
model: Danilo Trogu
“The perimeter of the building forms a compact triangle, whereas the disposition of the volumes and the architectural design of the elevations are fragmented. Transparencies, opaquenesses and shading pixels, draw a line, either precise or blurred between the levels. The alternation of natural and artificial light makes people interact and change their perceptions.” AF
There is greenery and Green in Milan: as opposed to hypocrisy and versus conformism.
The building looks like an isosceles triangle, compact around its parameter but fragmented in terms of its structure and the architectural design of its elevations.

The main [north and south] elevations play on a combination of transparency, opacity and pixels that gradually fade to make the borderline between the various levels well-defined at time but indeterminate in other places, a line faded even more by variations in the natural or artificial light and position of the onlooker. The elevation, made of translucent coloured polycarbonate, contrasts with the prefabricated base, along which a series of numbers runs calling to mind an old saying playing ironically in a modern-day key on the concepts of “time”, “museum” and, above all, “public space”, capable of embracing the overlapping of strictly commercial aspects that we find inside without having to be subjected to them on the outside as well.
The development of the main elevations should not fool us as regards the west elevation facing onto a residential section: although it is not actually visible from the entrance roads to the area, the project aimed at instilling dignity into this space at the rear (so often lacking in identity) by playing on the contrast with the main fronts through a flood of smooth, deep colour (with prefabricated panels dyed with a dark chocolate-coloured resin) and central island of greenery.

The project is based on the following compositional principles:
– communication versus monumentality: the large piece of writing running seamlessly around the base of the two main elevations gives the building a sense of monumentality and plays with a space now considered to represent the category of “definitive space”. This creates an ironic kind of elevated style [poised between Las Vegas and Augustan Rome] playing on a kind of commercial overlapping communicating “façade” that changes over time.
– the ground: the building, treated as a unicum, is set out primarily as a sequence of natural and artificial lines interacting with the ground and then defined structurally.
– the perimeter: emphasizing the acute-angled outside perimeter by deforming-layering its edges.
– the structures: the attempt to create a horizontal design through an overlapping of levels as opposed to a sequence/succession of non-interactive structures eventually forming a unicum.
– nature: due to the impossibility of being able to attain a fourth dimension by discovering an artificial material, which, in addition to solving all the various technical aspects is also capable of instilling the project with its own pleasant identity acceptable to most users, it has been decided to opt for nature to create and set out the building in its entirety, which is also intended, like some two-faced Janus, to be a second ‘head’ (terminus) for the system where nature resorts to artifice to create its own space.
– the promenades: attempting to construct a pathway that does not just provide access to the buildings but also constitutes a place in its own right: sometimes you wander beneath the sky/canopy supported by tall pilotis describing a seamless peristyle over on the side leading to the residential quarters; at other times, after turning the corner, you wander beneath a structure compressing the preceding space and offering shelter, like a niche, and framing the dynamic-kinetic landscape of the highway;
– the border: the attempt to create a natural “contour” structurally defining the edge of the shopping mall’s car park by as a superimposing of a natural/artificial system capable of creating its own inviting landscape that is dense in parts and linear elsewhere.